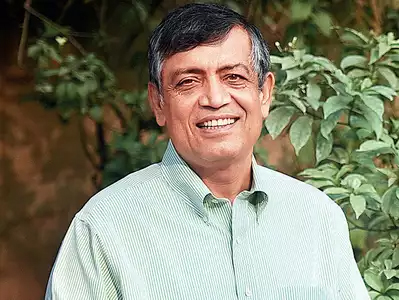 Sanjay Gupta, who once headed a top US financial services firm, is now working to find tech solutions to problems in India’s education system

In the audio-visual room at Shramik Vidyapith Municipal Urdu School in Dharavi, some 40 fourth-graders watch with rapt attention as an AI software reads to them The Boy Who Cried Wolf. Projecting visuals on a whiteboard, the automated voice elicits emulation: The kids try to repeat some of the English words they hear. Meanwhile, class teacher Ambreen Shaikh demonstrates the other tools the programme offers. “When I come across a word, like ‘cried’ where context can change the meaning, I can pull up the synonyms right here,” she says, bringing up a menu on the screen with a mouseclick. Not only can she access the English synonyms and Urdu translations of words, she can also use a picture dictionary to show her students a representative image.

Called RightToRead, the programme does more than build vocabulary. It helps students, who rarely converse in English in their homes or neighbourhoods, to become familiar with the language and pronounce words properly, thereby boosting their employability later. The software has been developed by English Helper, a company headed by Gurgaon-based Sanjay Gupta, who has spent the last decade researching the public education system in India to find solutions “to solve the seeminglyunsolvable issues that plague it”. The software has already been implemented in 45,000 government schools in Maharashtra (for free, as a test case) and will be in 20,000 more, shortly. Gupta has also received orders from schools in West Bengal,Assam, UP, Manipur, Sikkim and Karnataka.

“Eventually, we expect it to benefit 15 million students and two lakh teachers across India,” says Gupta, 60. Having quit his job as chairperson with American Express India in 2010, Gupta has been trying to get this project off the ground. He had been with Amex since 1996 in various roles, working out of offices in New York and Singapore. “For some time before I quit, I had been thinking of giving back in some way,” Gupta says. The education sector held special appeal partly because of the research he conducted in the area after quitting his job. But also because his mother, Kumud, had been a teacher of Hindi literature at a girls’ school in Kolkata, “and the value of a good education was deeply ingrained in me as a child”